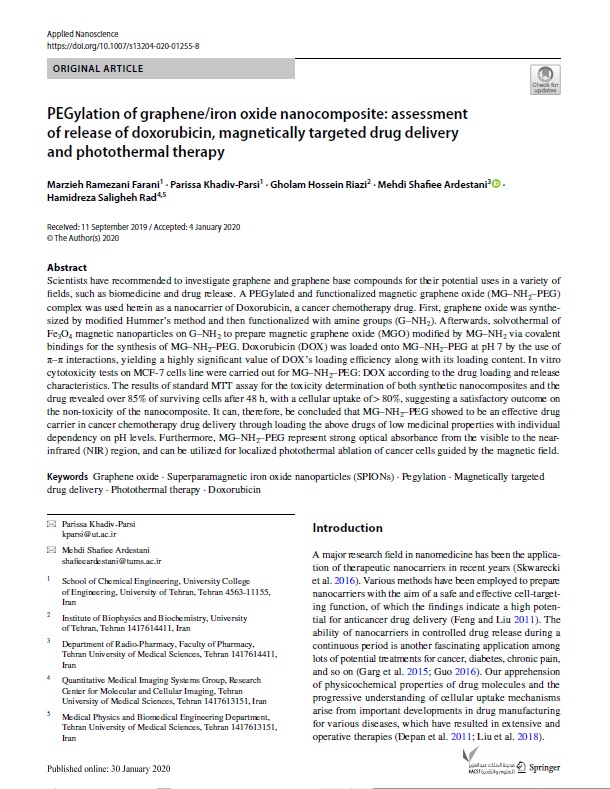 Scientists have recommended to investigate graphene and graphene base compounds for their potential uses in a variety of fields, such as biomedicine and drug release. A PEGylated and functionalized magnetic graphene oxide (MG–NH2–PEG) complex was used herein as a nanocarrier of Doxorubicin, a cancer chemotherapy drug. First, graphene oxide was synthesized by modified Hummer’s method and then functionalized with amine groups (G–NH2). Afterwards, solvothermal of Fe3O4 magnetic nanoparticles on G–NH2 to prepare magnetic graphene oxide (MGO) modified by MG–NH2 via covalent bindings for the synthesis of MG–NH2–PEG. Doxorubicin (DOX) was loaded onto MG–NH2–PEG at pH 7 by the use of π–π interactions, yielding a highly significant value of DOX’s loading efficiency along with its loading content. In vitro cytotoxicity tests on MCF-7 cells line were carried out for MG–NH2–PEG: DOX according to the drug loading and release characteristics. The results of standard MTT assay for the toxicity determination of both synthetic nanocomposites and the drug revealed over 85% of surviving cells after 48 h, with a cellular uptake of > 80%, suggesting a satisfactory outcome on the non-toxicity of the nanocomposite. It can, therefore, be concluded that MG–NH2–PEG showed to be an effective drug carrier in cancer chemotherapy drug delivery through loading the above drugs of low medicinal properties with individual dependency on pH levels. Furthermore, MG–NH2–PEG represent strong optical absorbance from the visible to the near-infrared (NIR) region, and can be utilized for localized photothermal ablation of cancer cells guided by the magnetic field.