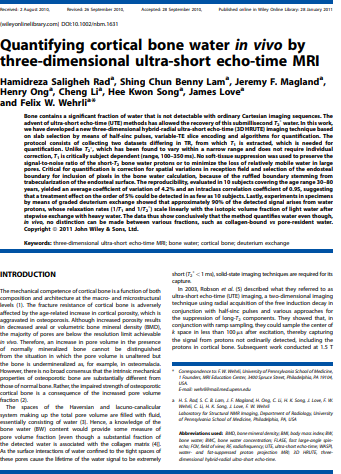 Bone contains a significant fraction of water that is not detectable with ordinary Cartesian imaging sequences. The advent of ultra-short echo-time (UTE) methods has allowed the recovery of this submillisecond T2 water. In this work, we have developed a new three-dimensional hybrid-radial ultra-short echo-time (3D HRUTE) imaging technique based on slab selection by means of half-sinc pulses, variable-TE slice encoding and algorithms for quantification. The protocol consists of collecting two datasets differing in TR, from which T1 is extracted, which is needed for quantification. Unlike T2, which has been found to vary within a narrow range and does not require individual correction, T1 is critically subject dependent (range, 100–350 ms). No soft-tissue suppression was used to preserve the signal-to-noise ratio of the short-T2 bone water protons or to minimize the loss of relatively mobile water in large pores. Critical for quantification is correction for spatial variations in reception field and selection of the endosteal boundary for inclusion of pixels in the bone water calculation, because of the ruffled boundary stemming from trabecularization of the endosteal surface. The reproducibility, evaluated in 10 subjects covering the age range 30–80 years, yielded an average coefficient of variation of 4.2% and an intraclass correlation coefficient of 0.95, suggesting 1 that a treatment effect on the order of 5% could be detected in as few as 10 subjects. Lastly, experiments in specimens by means of graded deuterium exchange showed that approximately 90% of the detected signal arises from water protons, whose relaxation rates (1/T1 and 1/T2) scale linearly with the isotopic volume fraction of light water after stepwise exchange with heavy water. The data thus show conclusively that the method quantifies water even though, in vivo, no distinction can be made between various fractions, such as collagen-bound vs pore-resident water.