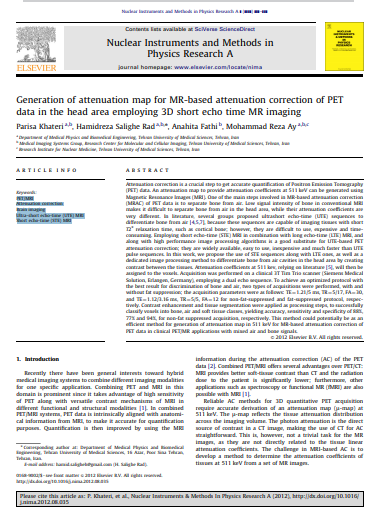 Attenuation correction is a crucial step to get accurate quantification of Positron Emission Tomography (PET) data. An attenuation map to provide attenuation coefficients at 511 keV can be generated using Magnetic Resonance Images (MRI). One of the main steps involved in MR-based attenuation correction (MRAC) of PET data is to separate bone from air. Low signal intensity of bone in conventional MRI makes it difficult to separate bone from air in the head area, while their attenuation coefficients are very different. In literature, several groups proposed ultrashort echo-time (UTE) sequences to differentiate bone from air [4,5,7], because these sequences are capable of imaging tissues with short T2n relaxation time, such as cortical bone; however, they are difficult to use, expensive and timeconsuming. Employing short echo-time (STE) MRI in combination with long echo-time (LTE) MRI, and along with high performance image processing algorithms is a good substitute for UTE-based PET attenuation correction; they are widely available, easy to use, inexpensive and much faster than UTE pulse sequences. In this work, we propose the use of STE sequences along with LTE ones, as well as a dedicated image processing method to differentiate bone from air cavities in the head area by creating contrast between the tissues. Attenuation coefficients at 511 kev, relying on literature [5], will then be assigned to the voxels. Acquisition was performed on a clinical 3T Tim Trio scanner (Siemens Medical Solution, Erlangen, Germany), employing a dual echo sequence. To achieve an optimized protocol with the best result for discrimination of bone and air, two types of acquisitions were performed, with and without fat suppression; the acquisition parameters were as follows: TE¼1.21/5 ms, TR¼5/17, FA¼30, and TE¼1.12/3.16 ms, TR¼5/5, FA¼12 for non-fat-suppressed and fat-suppressed protocol, respectively. Contrast enhancement and tissue segmentation were applied as processing steps, to successfully classify voxels into bone, air and soft tissue classes, yielding accuracy, sensitivity and specificity of 88%, 77% and 94%, for non-fat suppressed acquisition, respectively. This method could potentially be as an efficient method for generation of attenuation map in 511 keV for MR-based attenuation correction of PET data in clinical PET/MR applications with mixed air and bone signals.