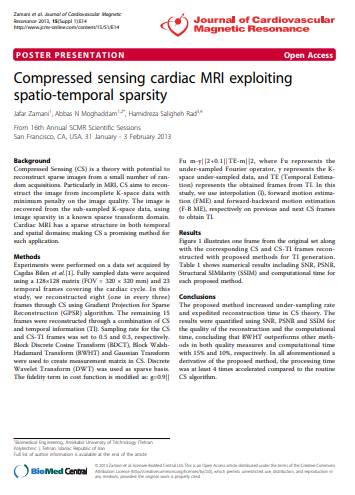 Background: Compressed Sensing (CS) is a theory with potential to reconstruct sparse images from a small number of random acquisitions. Particularly in MRI, CS aims to reconstruct the image from incomplete K-space data with minimum penalty on the image quality. The image is recovered from the sub-sampled K-space data, using image sparsity in a known sparse transform domain. Cardiac MRI has a sparse structure in both temporal and spatial domains; making CS a promising method for such application.
Results: Figure 1 illustrates one frame from the original set along with the corresponding CS and CS-TI frames reconstructed with proposed methods for TI generation. Table 1 shows numerical results including SNR, PSNR, Structural SIMilarity (SSIM) and computational time for each proposed method.
Conclusion: The proposed method increased under-sampling rate and expedited reconstruction time in CS theory. The results were quantified using SNR, PSNR and SSIM for the quality of the reconstruction and the computational time, concluding that BWHT outperforms other methods in both quality measures and computational time with 15% and 10%, respectively. In all aforementioned a derivative of the proposed method, the processing time was at least 4 times accelerated compared to the routine CS algorithm.